With a production in 2012 of approx. 2.2 million tonnes (2011: 1.9 million tonnes) more pellets were produced in Germany than ever before. Also the demand for pellet furnaces about 40,000 new stoves and heaters brings the total to 280,000 units.

In 2013, the German Energy Wood and Pellet Association (DEPV) expect further growth. Production is expected to increase to 2.3 million tons, and an increase of 47,000 new furnaces. This year’s production is the result of the continuous increase in recent years.

The average pellet price in 2012 was 235.88 EUR / t, corresponding to a price increase of 33% in the last 10 years (for fuel oil it was 145%). THE technically possible production increased in 2012 to 3.1 million tons of production capacity. Although the increase in firings in 2012 rd. of 17 percent, only about 80 percent (1.7 million tonnes) of domestically produced pellets is consumed here. The surplus is exported. 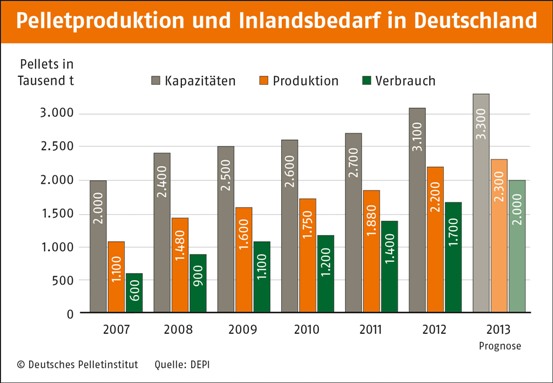