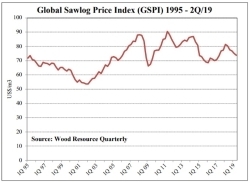 The Global Sawlog Price Index (GSPI) fell for the fifth consecutive quarter in the 2Q/19, reaching a two-year low. Log prices were down on all continents, with the biggest declines occurring in Europe.

In the 2Q/19, the European Sawlog Price Index (ESPI) fell to a nine-year low, reports the WRQ. In Euro terms, average sawlog prices in Austria and Germany have fallen almost 20% over the past two years, thus improving the competitiveness of the two countries sawmilling industry.

US softwood log shipments to China have fallen by $124 million in value since the trade war started May 2018.

Prices for softwood pulplogs and wood chips fell in practically all markets around the world in the 2Q/19 because of a combination of factors. These factors varied by region, but included reduced fiber demand, lower pulp prices, insect-damaged forests, and favorable logging conditions.

In the 2Q/19, the Softwood Fiber Price Index (SFPI) fell by 1.5% from the previous quarter.

The Hardwood Fiber Price Index (HFPI) was down 0.5% quarter-over-quarter in the 2Q/19. Hardwood pulplog prices fell the most in Indonesia, Germany, the US Northwest and Brazil, while prices increased in Russia, Japan and Australia.

Pulp mills around the world have had to tackle both weak demand and high inventories of pulp during the second quarter of 2019.

The prices for NBSK and BHKP market pulp in July were down as much as 26% and 18% respectively, from October of last year.

With unchanged or slightly higher log costs and lower lumber prices in the 2Q, sawmills in North America saw their profit margins decline again after the shortlived improvements seen in the 1Q/19.

Demand for lumber in China, the UK, Egypt and the Netherlands increased this year despite a slowdown in the global economy.

Lumber production in Canada from January to May 2019 was 9% lower than it was during the same period in 2018. Most of the decline were in British Columbia, where production was down 16.5% year-over-year.

The increased lumber demand in the MENA region continued in the 1Q/19 when the two major markets, Egypt and Saudi Arabia, increased their importation by over 50% from the 1Q/18.

Wood fiber costs for US pellet manufacturers fell in the 2Q, while Canadian pellet producers experienced higher costs due to reduced supply of sawmill residues.