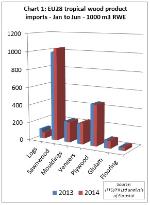 Although there has been some shifting between product groups, total EU imports of tropical hardwood products in the first half of 2014 hardly recovered from the historically low levels recorded in the previous two years.

In the first half of 2014, the volume of tropical hardwood imports (refers to total roundwood equivalent volume of logs, sawnwood, mouldings & decking, veneers, plywood and glulam) fell into both Belgium (-5%) and France (-4%), the two largest European destinations for these products (Chart 2). Both markets are currently affected by consolidation of operators in the tropical wood industry and rapidly changing demand trends. After signs of recovery at the end of 2013, both countries also registered a general slowdown in construction activity in the first half of 2014.

In contrast, the volume of tropical hardwood imports increased into the Netherlands (+13%) in the first 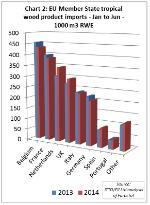 half of 2014. After a long period of recession, Dutch building activity improved gradually in the second half of 2013 and first half of 2014. Dutch construction still faces challenges including low permit issuance, stricter regulations for housing corporations, and government austerity. However, demand for hardwood has benefited from the temporary VAT reduction on renovation activities implemented since early 2013 which is due to remain in place until the end of 2014.

UK imports of tropical hardwood products were up 7% in the first half of 2014, boosted by good recovery in the construction sector. UK construction activity slowed a little in July but recovered strongly in August. New construction orders continue to rise in the UK, suggesting good market prospects for the rest of the year. In contrast, imports of tropical hardwood products into Germany were down 9% in the first half of 2014 compared to the same period last year.

After two years of robust growth, Germany's construction sector has been contracting during 2014. Tropical hardwood is struggling to compete against alternative products in several key market segments in Germany including the decking, window scantlings, plywood and flooring markets. Implementation of a tough EUTR inspection regime in Germany and the government's decision to confiscate a consignment of African wenge logs due to an alleged breach of the law may also have played a role to discourage tropical wood imports into Germany this year.

There was a pick-up in demand for tropical hardwood products in Spain and Portugal in the second quarter of 2014, mainly to replenish depleted stocks. However in both countries, as in Italy, there is still very little speculative purchasing in anticipation of any increase in future demand.