EPF: Economic Review of the Wood-Based Panels Industry in 2015

On the occasion of EPF’s Annual General Meeting in Venice on 7th & 8th July, and in the presence of MEP Simona Bonafè, MEP David Borrelli, Mr Carlo Mari Medaglia of the Italian Ministry of the Environment, captains of the European panel industry and their suppliers, the Chairman and President of the Composite Panel Association of North America and members of the trade press, Mr Clive Pinnington, EPF Managing Director presented an economic review of the wood-based panels industry in 2015. Figures were drawn from the recently published EPF Annual Report, an extensive compilation of industry statistics collected by the federation.

All production figures for particleboard, MDF, OSB, hard and softboard relate to the EU28 and EFTA.

Plywood production increased by 1% in 2015 to 2.8 million m³ and is expected to rise by an additional 3.5% in 2016. Together these figures represent a growth of 3% in 2015 for the wood-based panels industry in terms of production volume: 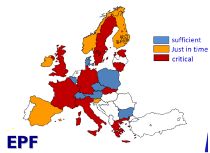 EPF reported that the industry is guardedly optimistic about the future, predicting stable to good outlooks in all markets. However the industry is greatly troubled by the increasingly critical status of wood availability, as measured by its own research (look at map).